Birthday BBQ at Levera beach and an experiment in gullibility...

Tiny Paradise in a big sea...

Map of Grenada - the road trip, from Grand Anse to Levera Beach... long drive!
So here it was, the day after the wedding. We woke up and went to breakfast, chatting about the day ahead - a beach barbecue (or barbeque, depending on where you're from) for Len's birthday. A large tour bus showed up and we ambled out, dressed for the day - and it rained. I mean - raaaaiiiiinnnned. Did that stop us? Hell no! This is Grenada! It don't rain all day here! 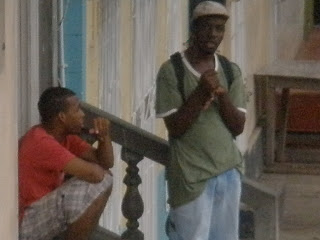 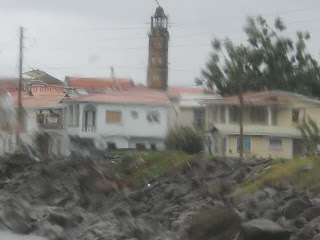 Outside Gouyave - out of focus because of - you guessed it - rain. 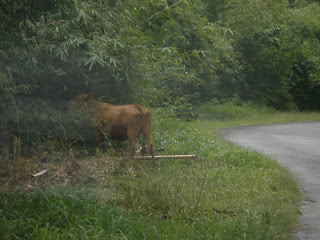 Even the cows didn't want to be out in this... 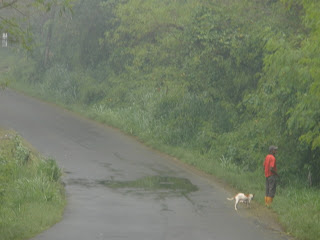 ...but I don't think this guy had a choice.
The Grand View staff raced on ahead of us in separate vehicles with the food, and we cruised along the narrow roads in this large silver bus. It was a long ride, and you can't do that without a pit stop - translated, someone has to pee. And smoke. Or both. But not at the same time. Trouble is, there's not a lot of places to pop into (like a McDonald's) where you can unload a bus of people and have them line up. So... we stopped at a police station. 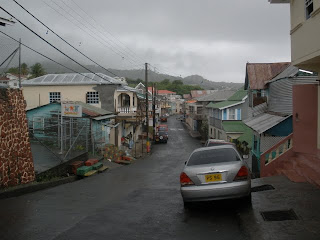 After a brief discussion and a few pee-pee dances, they let those of us who had to go, go. Funny... when I was standing outside having a smoke, I saw a cop car pull up with someone in the back. They let him hang out in the car while they went inside for a minute. Different mentality - the guy just rolled down the window and stayed there. I don't know about Canada, but you'd never see that in the states... he wasn't even bothered being back there. Oh well. It is an island - where's he gonna go? 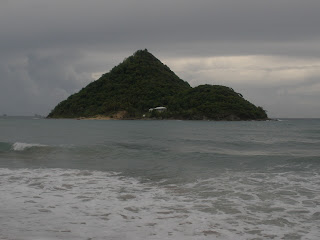 To most people this is the island off Levera beach, a beautiful place ( I think Gilligan is still there.) 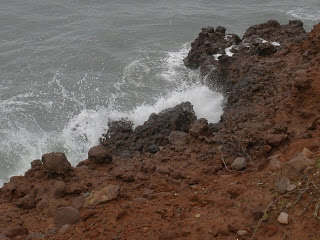 Water crashing on the rocks... I think I saw a volleyball with a face drawn on it there...

Then, as we closed in on Levera beach, the miracle of miracles happened - the rain stopped! Though there were some clouds, the sun shone through, and it looked like we were gonna have a fun day. Speaking of fun, this is where Amanda, a.k.a. Sunshine, comes in. The target: Gabrielle, her cousin. 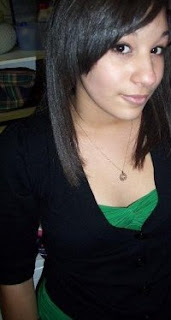 Gabrielle, doe eyed and gullible as a trout in a fishing pond.

It started the night before, when we were headed up from the wedding. She noticed that her watch time didn't correspond to the SUV's clock and said she didn't understand why she couldn't get the right time. "That's because time as we know it doesn't exist here," I replied innocently, meaning that you don't pay attention to the clock there like you do at home. Time literally doesn't feel like it exists. I didn't expect her reaction, though.

"Really? Serious?"
Oh, I got a nibble. Tee-hee.
"Seriously. They don't have time here. No calenders, clocks, nothing. You didn't notice?"
The big doe eyed look.
"No really. Serious?"
Pause. A tug on the line.
"Oh yeah, that's why your watch doesn't work here."
She looks at Kim in the front seat, then back at me. Kim smiles and shrugs her shoulders.
"Wow..."
Reel it in!
So you know I had to have more fun with her the next day. 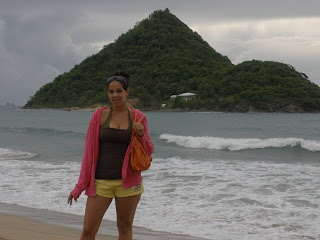 ...but actually, it's Amanda's Island. And she kicked Gilligan off.
It started when we stepped off the bus. Gabrielle was right behind me and saw the island. "Wow," she said. "What do they call that?" she asked, pointing to the island.
I cast the line. Looked at Amanda.
"Oh, that's Amanda's island. "
Doe eyes again. Almost felt like I had Bambi in a 10x gunsight. I smiled.
"What? That's Amanda's? Serious?"
Clear shot. (Notice how I switch to hunting?) Amanda nods, almost as if on cue.
"Yup," Amanda says casually. "Grandad gave it to me."
Long pause as the tiny gears of her 15 year old mind grind along, trying to comprehend the information.
"Serious?"
Now Amanda sights her down too. She grins at me. Something conspiratorial, almost evil in a fun way.
"Oh yeah,"she replied. " That's all mine. "
BLAM! BLAM!
We both struck at the same time and she fell for it like a deer at a salt lick.
"Wow... holeee..."
Later I told Kim about it, and she decided to get a shot in. See, there's another island - 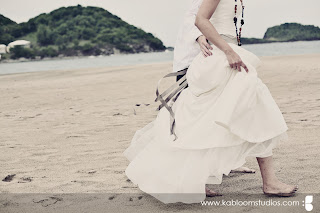 That's Annette... and in front of her, Annette's Island. Gilligan never went there.
- so Kim added to the fun. As they set up the boat... 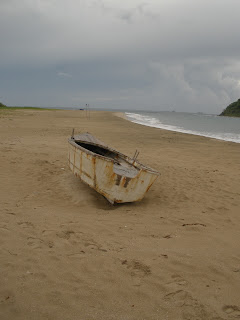 The boat... almost pretty enough to be an oil painting. Wait... it usually is!

Kim and I started talking withing earshot of Gabrielle. We chatted about Amanda's Isle (actually I think it's called Sugarloaf) and Kim, without missing a beat, pointed out Annette's island. Annette was standing nearby and didn't comment (Kim already told her about it) and kept a totally straight face. Gabrielle listened, nearly broke her own neck looking over at the islands, and muttered...
"Wow..."
Sucker.
Yeah, it's not fair to play that on a fifteen year old. Sort of. But she's fifteen. No one can be that gullible. Or can they? Later that night, she came up and said tha she found out it wasn't Amanda's Island. How could it be?
"Oh, it's part of the estate. Mr. Griffith's an important man here. You want to see the deed and title? I can get him to show you," I replied.
Silence for a moment.
"Wow..."
Like fishing with dynamite.... 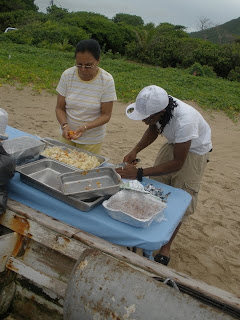 Emanuel and Aunty Linda making wings and potato salad in the boat/grill. Damn good food... and Emanuel is one of the best chefs I've ever met. Hilarious, too.

- and making some of the best wings I've ever eaten. And I'm a wing eater from way back. We all enjoyed the meal - 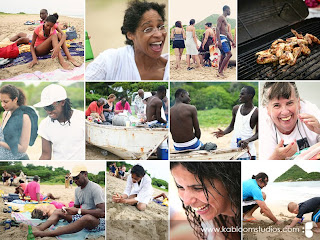 A montage of life as it should be. Fun and never ending. 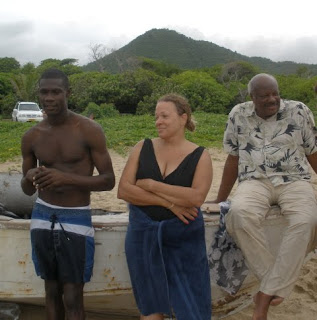 Anthony, or GT, (left) one of Len's main staffers - the guy can fix anything. Center - Ann, and the man of the day, Len (right.) 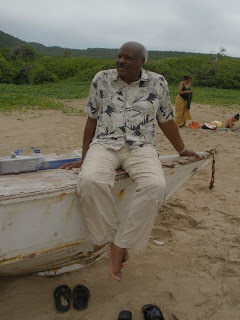 Len, watching the beach and making sure those kids didn't engage in too much stupidness. (Yeah, he looks casual, but he always does. Don't doubt for a minute that the man isn't on top of things.) 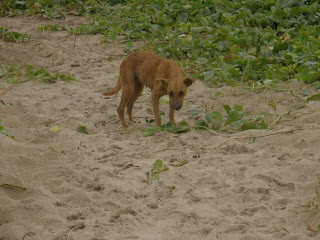 And there's the ever present beach dog... we fed him bits of chicken.
- and had some fun on the beach. The water was great, and there were activities on the beach, like making a "Sandman"... 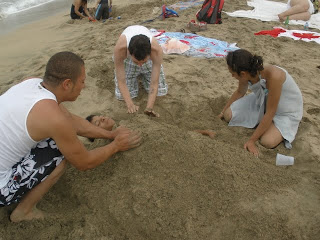 Jordan (under the sand) lays calmly as Ian (center) and his brother Micheal and sister "Gullible" Gabrielle make him into a "he-man!" 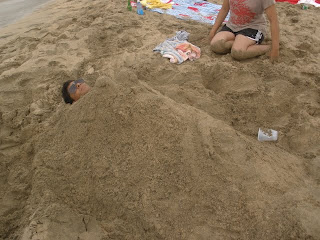 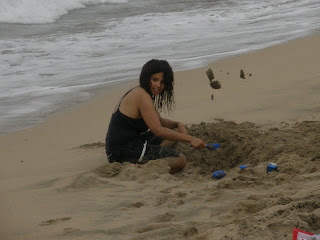 Liz, a.k.a. "Taxi Girl", trying to dig her way to freedom in Switzerland.

Pretty soon it was time to make the long journey back. So everyone settled into the bus... 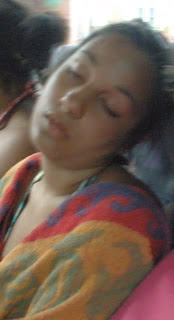 Gabrielle dreams of the day she can get her own island...
Emanuel (dude, I hope I'm spelling your name right,) and GT took off ahead of time. We deliberately delayed a bit, then piled back on the bus. The ride back was a bit quieter. People were recharging their batteries (oddly enough, mostly the younger among us.) I took a few pics, some of historic significance. 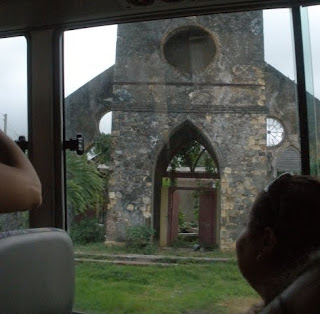 A 153 year old cathedral, now a ruin, is still beautiful. 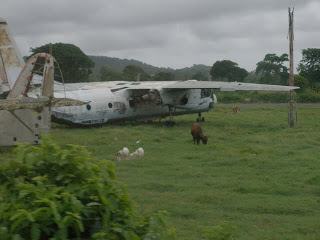 A couple of damaged Cuban planes still line the old airfield, a reminder of the past. What you call it depends on who you are. I call it old planes.

Some were just remarkable. 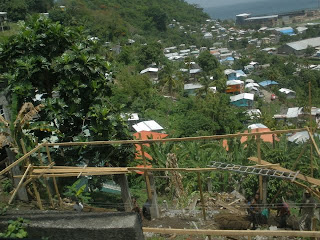 The valley leading down toward Grenada's Sports Stadium. Hell of a drop...

We made it back with one more stop (to pee, of course) and everyone split off to their rooms. Dinner was at eight, but the restaurant was going to be closed. That didn't mean the kitchen wasn't busy, however.

Emanuel and Kellan (the other chef, also awesome) were busy setting up a buffet for a party. Rachel, the Pirate's Cove bartender, arranged it. You know how hard it is to keep a secret in a fishbowl? We pulled it off, though... total surprise. Len had no idea... as far as we know. 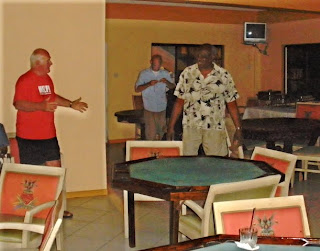 Tuck, (left) our resident rum "expert," leads the charge in a surprise welcome into the sports bar, where the party was held. 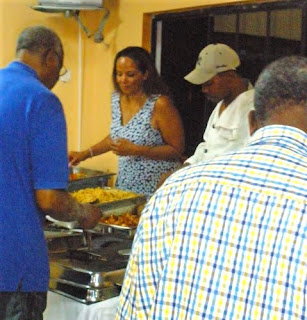 Kim lends a hand serving up goodies alongside Kellan (midright.)

The food came out, and soon the party was underway... and Rachel brought out the cake. 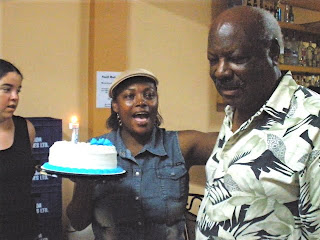 Wait.... I'm older than seven...where's she gettin' her information? 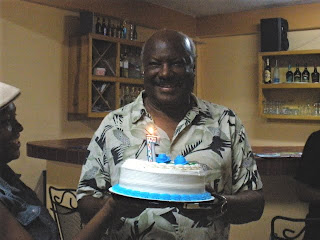 Len, a happy man on a happy day. Thanks for everything...

The night was great, and we all had a wonderful time. The food was excellent, and the guys at the Jolly Roger Sports bar were terrific in helping us out. Since is the last blog post about the visit, I wanted to thank everyone there for their hard work and just being great people to be around. And to GT - bumps. 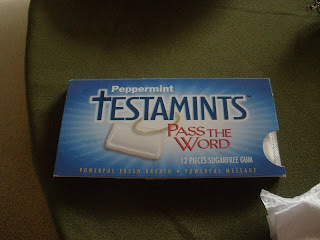 Testamints gum - because you never know when you're going to meet Jesus, and you'll want minty breath when you do!!
(This is a real product, but the ad isn't. In fact, I'm probably going to hell for it.)
Posted by Redleged at 4:59 PM No comments:

Awesome video by my nephew (E-Clipse.) Give it a watch!

For the holidays or any party... a traditional Caribbean rum punch!

one of sour,
two of sweet,
three of strong,
four of weak.

translated:
(Mind you, this will make a fair amount, have bottles handy...)
1 cup freshly squeezed lime juice, no pulp.
2 cups simple syrup*
3 cups rum (half regular, preferably Mt. Gay, half either Clarke's Court or other high alcohol rum - 151 will do if you have to.)
4 cups clear spring water ( I used Fiji - very nice.)
fresh grated nutmeg

*simple syrup - take one cup of water (not from the 4) and one cup cane sugar, mix in a pot, and heat over low heat until sugar dissolves and mixture thickens slightly. Let cool.

Take it all, mix it into a large pitcher - the bigger the better, mix thoroughly, and add nutmeg to taste. Hint: the punch is best once the nutmeg sinks. Serve over ice or with club soda.
You can also bottle it and keep it cool for several weeks... if it lasts that long.

Think of it as busking... this is my Pay Pal guitar case.

Miss him... he lives with his sister and my ex. He's my obligatory cutsie photo. (All blogs have them.)

Carribean Paradise at a Reasonable Rate!

Rate Me! Click below, click on For Laughs, and select the number of stars below narcissism central.

Triggerstreet - where my screenplay sits.